Sampling distribution is the concept which helps connect Probability to Statistics. 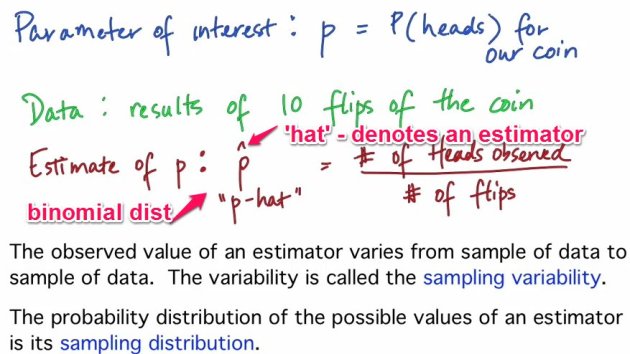 ‘Nearly = ‘ because of the variance in the real world

p-hat follows a normal distribution (Central limit theorem). P is the mean in the theoretical world and p(1-p)/n is the variance

As n increases the variability and SD of the estimator decreases

Estimator of the mean

Taken from a normal model, If we take samples of size n then take the means of each sample , the mean of these means is the same as mean of the theoretical model and SD of the distribution of the means = theoretical SD  / sqrt(n)

Even with a skewed model, the above holds good

Sampling (with replacement and without)

Sampling can be done in a couple of different ways. One question that arises when sampling is, “After we select an object and record the measurement of attribute we’re studying, what do we do with the object?” There are two options: we can replace the object into the pool of objects that we are sampling from, or we can choose to not replace the object.

Disclaimer : These are my study notes – online – instead of on paper so that others can benefit. In the process I’ve have used some pictures / content from other original authors. All sources / original content publishers are listed below and they deserve credit for their work. No copyright violation intended.

The study material for the MOOC “Making sense of data” at Coursera.org